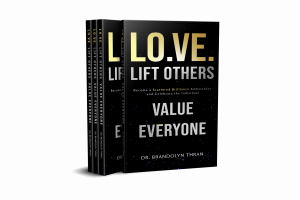 Dr. Brandolyn Thran is a brilliant woman with a PhD in molecular biology, but despite earning an advanced doctoral degree and completing a complicated dissertation, she did not feel like a writer and had no idea how to move forward with her book idea.

In the science world, there are clear steps and guidelines to approaching a research project. She “thought there was a ‘right way’ to do this…like somewhere, someone wrote in stone the how…and if I were to be successful in my book dream, then I would need to find that stone and follow the directions.”

Brandolyn also had this idea that authors were somehow special individuals with some sort of special gift. She put this beautifully when she wrote, “No one sees the writer do the hard work…you can’t, because the public isn’t invited into the work sessions…just the product. I think now, with reality TV shows, and shows that document journeys, we have more access than ever to the process, but still, there is so much that happens IN the writer that no one can see that it really is part of the mystery and why I think we celebrate a creative person who puts there stuff out there to be seen, because they got to the other side!!! So really, when we are new creatives, new writers, we have no idea what the journey is going to be…it’s a big, giant black box.”

After publishing, she laughed as she admitted that she had completely dispelled that belief. She still feels like her same old self after having written a book.

She hadn’t realized how much that belief that writers were somehow extra special people had impacted her confidence at the beginning of the writing process.

These were big blocks to work through. Brandolyn wanted to know each of the steps and how they were going to fit together but that’s not quite how creative work happens. It was important during the initial phases of our work together that I gave her clear steps on structuring and organizing her ideas but that we had good discussions and I asked questions at each step to show her that circling back and deepening and clarifying was good and important work to writing her best book.

We had to balance honoring her need to have clear direction with the often messy, iterative process of writing a book.

When Brandolyn contacted me, she had a huge idea, and it took several sessions to drill down her argument into something that she could actually tackle in one book. We set aside many of her ideas for later projects.

Narrowing her idea down helped Brandolyn grasp and get a hold of her thoughts. She’s a highly creative soul and an idea person, so really drilling down her overall argument helped…until she created her table of contents and started writing.

Because she’s a scientist at heart, she wanted to explain and include every possible detail to make sure her argument was thorough, but she was losing her overall point to these details. Even though we’d narrowed her overall argument and she had a clear framework she wanted to share for reluctant rebels to question, evaluate, and begin to rebuild systems, her book still kept growing as she got more and more granular with the support she felt she needed.

Over and over, we discussed what she really needed to include to make her overall point. This is where she really began to embrace the iterative process of writing a book.

What’s interesting is that in this phase, Brandolyn applied her own framework on questioning unhelpful systems to her book. She felt very constrained by the idea of chapters. 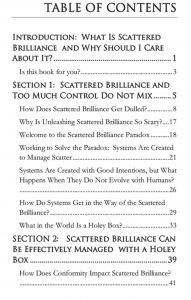 “I don’t want chapters in my book. At all. I don’t like how it’s going together,” she said during one session.

Since her overall argument in her book is about blind adherence to unhelpful systems, I paused for a bit. But I still answered (with a somewhat hesitant), “Yes, they do.”

After our session, I questioned my own adherence to this system. Does a book need chapters? Or, does it just need to flow, be organized for the reader, and make a cohesive argument? We ended up having an extended conversation on Voxer (the walkie-talkie type app I use with clients) about the necessity of chapters vs. an overall organizational structure.

Brandolyn ended up writing a chapter-free book. It is still divided into sections with headings, but removing the constraint of chapters allowed her own creativity to flourish and her arguments to flow. It still has a table of contents, but for some reason, removing the word “chapter” from how she thought about her book allowed her to open up and connect with her ideas and for her ideas to connect with one another.

This is a great lesson in embracing the individuality of each of our creative processes and also in applying her own arguments about systemic thinking to her creative work and process.

Once Brandolyn broke free of the chapter constraints, she ended up sitting down and drafting the whole book pretty quickly, and in fact, she wrote most of it on her own without my support. We worked very closely on the structure and getting her clarity on her ideas, and once she had that down, she was off and writing.

In fact, I was so surprised when she contacted me and said, “I’m done with my first draft. I cut it way back, got super focused, and it’s much shorter than I thought it’d originally be, but I love it. Can I send you the final section?”

We ended up working through that section together and clarifying the explanations of her framework, but that was it. Brandolyn used book coaching as a jumping-off spot to learn to embrace her own creative and writing process. She allowed herself to open up and embrace the messiness of it.

Once she did that and let go of the idea that she had to put every idea ever in it and that she could follow her own organizational structure, she had the confidence to move forward and get her ideas down on paper.

She proudly released her book, LO.VE. Lift Others. Value Everyone.: Become a Scattered Brilliance Ambassador and Celebrate the Individual in January 2022. “Before starting, when the book was just a thought/dream, I really thought there was a “right way” to do this…like somewhere, someone wrote in stone the how…and if I were to be successful in my book dream, then I would need to find that stone and follow the directions. I thought that to write a book, clearly one had to be extra special, and honestly, I really wasn’t sure I was that extra-special, so could I really do it?!? In coaching with Amy, she never once doubted, or at least she never showed it, if I could accomplish my goal. She patiently moved with me through MY process. Amy was brilliant at helping me untangle the process and tackle it in bite size chunks.

Amy has a beautiful balance between head knowledge (like past participles and verb tense) and heart knowledge (meeting people right where they are). She knows when to use what, and at the appropriate balance. She moved me to do my best work and dig deep. She isn’t afraid to ask questions and challenge – that is hard to be on the receiving side of…not gonna lie! When she gives a review, she GIVES A REVIEW! She doesn’t just say, “it’s good” – she demands excellence. BUT, she does it in such a fun and accessible/accomplishable manner. We also laughed a lot! Amy doesn’t take all this hard and important work too seriously.” Dr. Brandolyn Thran

Posted in Case Studies
← How does one become a writer?Episode 86: Becoming a Novelist with Mystery Author Amy S. Peele →

Are you ready to get your ideas out of your head, onto the page, and into the world? Let's chat.

Thanks for subscribing! I'm looking forward to connecting with you.

My Novels: The Overlander’s Series

We use cookies on our website to improve your experience by remembering your preferences and repeat visits. By clicking “Accept”, you consent to the use of cookies. You can learn more here.
Cookie settingsACCEPT
Manage consent

This website uses cookies to improve your experience while you navigate through the website. Out of these, the cookies that are categorized as necessary are stored on your browser as they are essential for the working of basic functionalities of the website. We also use third-party cookies that help us analyze and understand how you use this website. These cookies will be stored in your browser only with your consent. You also have the option to opt-out of these cookies. But opting out of some of these cookies may affect your browsing experience.
Necessary Always Enabled
Necessary cookies are absolutely essential for the website to function properly. This category only includes cookies that ensures basic functionalities and security features of the website. These cookies do not store any personal information.
Non-necessary
Any cookies that may not be particularly necessary for the website to function and is used specifically to collect user personal data via analytics, ads, other embedded contents are termed as non-necessary cookies. It is mandatory to procure user consent prior to running these cookies on your website.
SAVE & ACCEPT